Equipped with a CPU, the VCAC-A card is installed with a standalone operating system that is separate from the host server. Thus, the VCAC-A card can be topologically regarded as a standalone “node” with VPU/GPU capabilities. The VCAC-A card is connected to the host Intel® Xeon® platform over a PCIe* non-transparent bridge (NTB) – over a virtual ethernet network 172.32.x.1/24. The host kernel must be patched to enable the virtual Ethernet over PCIe.

The CEEK automates the overall build and installation process of the VCAC-A card by joining it as a standalone logical node to the Smart Edge Open cluster. The CEEK supports force build VCAC-A system image (VCAD) via flag (force_build_enable: true (default value)), it also allows the customer to disable the flag to re-use last system image built. When successful, the Smart Edge Open controller is capable of selectively scheduling workloads on the “VCA node” for proximity to the hardware acceleration.

When onboarding applications such as Open Visual Cloud Smart City Sample with the existence of VCAC-A, the Smart Edge Open controller schedules all the application pods onto the edge node except the video analytics processing that is scheduled on the VCA node as shown in the figure below. 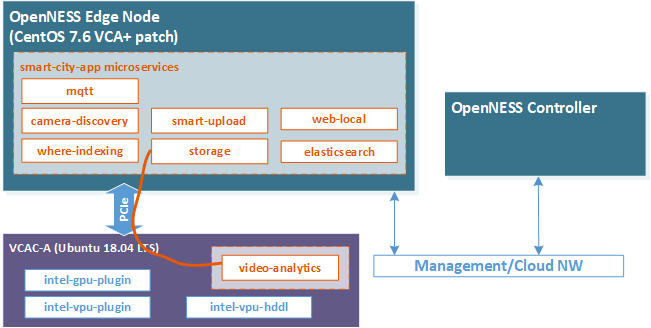 During the VCAC-A installation, the VCA nodes are labeled with vcac-zone=yes. Therefore, to direct the Smart Edge Open controller to schedule particular workloads on the VCA node, the nodeAffinity field should be used in its Pod specs as shown below:

Another construct used when deploying Smart Edge Open is the VCA pool, which is a similar concept to the Node pools that are supported by Azure* Kubernetes* Service and Google* Kubernetes Engine. The VCA pool is a unique label assigned to the group of VCA nodes that are plugged into one node. This enables the scheduler to execute related workloads within the same VCA pool (i.e., within the same edge node physical space). The VCA pool is assigned the label vcac-pool=<vca-host-name>, which reflects the hostname of the VCA host that all the VCAC-A cards are connected to.

Also, the VCA nodes follow a special naming convention. They are assigned the name of their host nodes appended with vca keyword and a number (<vca-host-name>-vcaX). The number is an incremental index to differentiate between multiple VCAC-A cards that are installed.

For the example above, the 3 VCA nodes are grouped into the VCA pool and labeled as vcac-pool=silpixa00400194.

The VCAC-A NFD manifest file /opt/intel/openvino/k8s-nfd/nfd-vca-features is pre-packaged in the VCAC-A system image. This file is mounted to /etc/kubernetes/node-feature-discovery/features.d/ during the VCAC-A install sequence and accordingly, the VCA node is labeled by nfd-master with these features.

VCAC-A features that are discovered by NFD and labeled in Kubernetes can be shown when running the command:

Kubernetes provides the Device Plugins framework that is used to advertise system hardware resources. The device plugins of interest for VCAC-A are: VPU and GPU. They are installed as part of the VCAC-A install sequence that is performed by the CEEK.

Another ingredient involved in the inference execution through VCAC-A VPUs is the HDDL-daemon that is deployed as a Kubernetes Daemonset. It acts as an arbiter for the various applications/Pods trying to gain access to VPU resources. Therefore, the Smart Edge Open cluster is ready for onboarding applications and availing of VCAC-A acceleration without worrying about other dependencies.

VPU and GPU device plugins as well as HDDL Daemonset are deployed in the Smart Edge Open cluster as part of the VCAC-A installation sequence that is performed by the CEEK.

VCAC-A telemetry is an integral part of the Smart Edge Open telemetry suite that enables the Kubernetes scheduler to perform telemetry-aware scheduling decisions. The following metrics are exported:

The VCAC-A VPU metrics are exported by the NodeExporter that integrates with Prometheus* for real-time metrics collection, event monitoring, and alerting. VPU metrics exporting is started by running:

The VPU metrics exporter script is executed as part of the VCAC-A install sequence that is performed by the CEEK.

Telemetry-Aware Scheduling (TAS) is the mechanism of defining policies that the controller aims to fulfill at run-time (based on the collected real-time metrics). A sample VCAC-A VPU telemetry policy is given below that is applied by default as part of the install sequence performed by the CEEK.

The above telemetry policy is applied by default as part of the VCAC-A install sequence performed by CEEK.

The diagram below demonstrates an example use of the VCAC-A telemetry within the Smart Edge Open context: 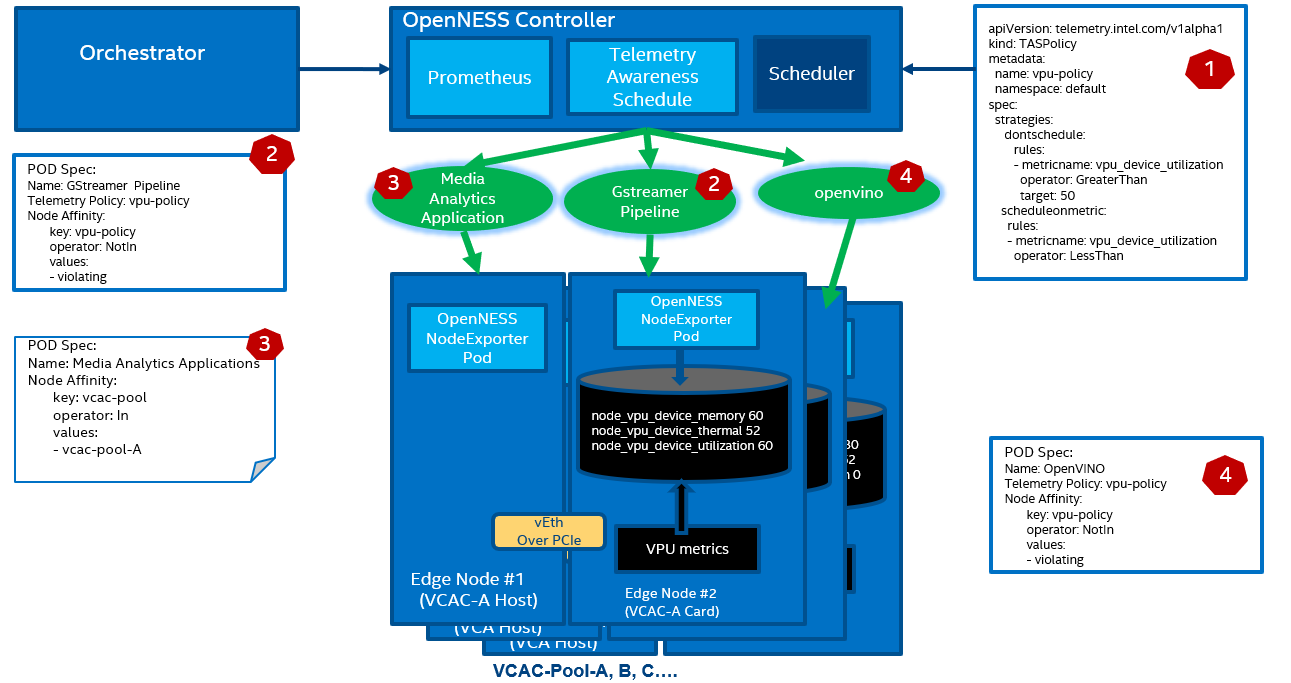 The pre-defined Smart Edge Open flavor media-analytics-vca is provided to provision an optimized system configuration for media analytics workloads leveraging VCAC-A acceleration. This flavor is applied through the CEEK playbook as described in the Smart Edge Open Flavors document and encompasses the VCAC-A installation.

The VCAC-A installation in CEEK performs the following tasks: