The deployment of AI and machine learning (ML) applications at the edge is increasing the adoption of FPGA acceleration. This trend of devices performing machine learning at the edge locally versus relying solely on the cloud is driven by the need to lower latency, persistent availability, lower costs, and address privacy concerns.

This document explains how the FPGA resource can be used on the Open Network Edge Services Software (Smart Edge Open) platform for accelerating network functions and edge application workloads. We use the Intel® FPGA PAC N3000 as a reference FPGA and use LTE/5G Forward Error Correction (FEC) as an example workload that accelerates the 5G or 4G L1 base station network function. The same concept and mechanism is applicable for application acceleration workloads like AI and ML on FPGA for Inference applications.

The Intel® FPGA PAC N3000 is a full-duplex, 100 Gbps in-system, re-programmable acceleration card for multi-workload networking application acceleration. It has an optimal memory mixture designed for network functions, with an integrated network interface card (NIC) in a small form factor that enables high throughput, low latency, and low power per bit for a custom networking pipeline.

The Intel® FPGA PAC N3000 card used in the FlexRAN solution exposes the following physical functions to the CPU host: 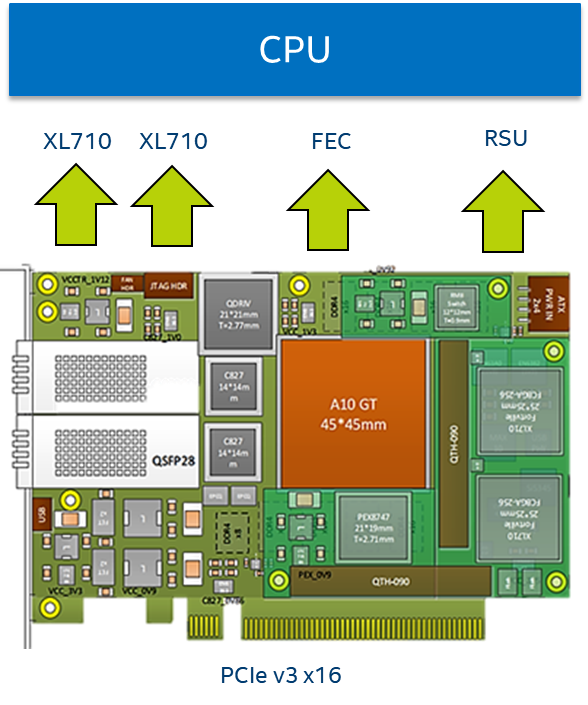 FlexRAN is a low-latency network function that implements the FEC. FlexRAN uses both FEC and Ethernet resources from the FPGA using POD resource allocation and the Kubernetes* device plugin framework. Kubernetes provides a device plugin framework that is used to advertise system hardware resources to the Kubelet. Instead of customizing the code for Kubernetes (K8s) itself, vendors can implement a device plugin that can be deployed either manually or as a DaemonSet. The targeted devices include GPUs, high-performance NICs, FPGAs, InfiniBand* adapters, and other similar computing resources that may require vendor-specific initialization and setup. 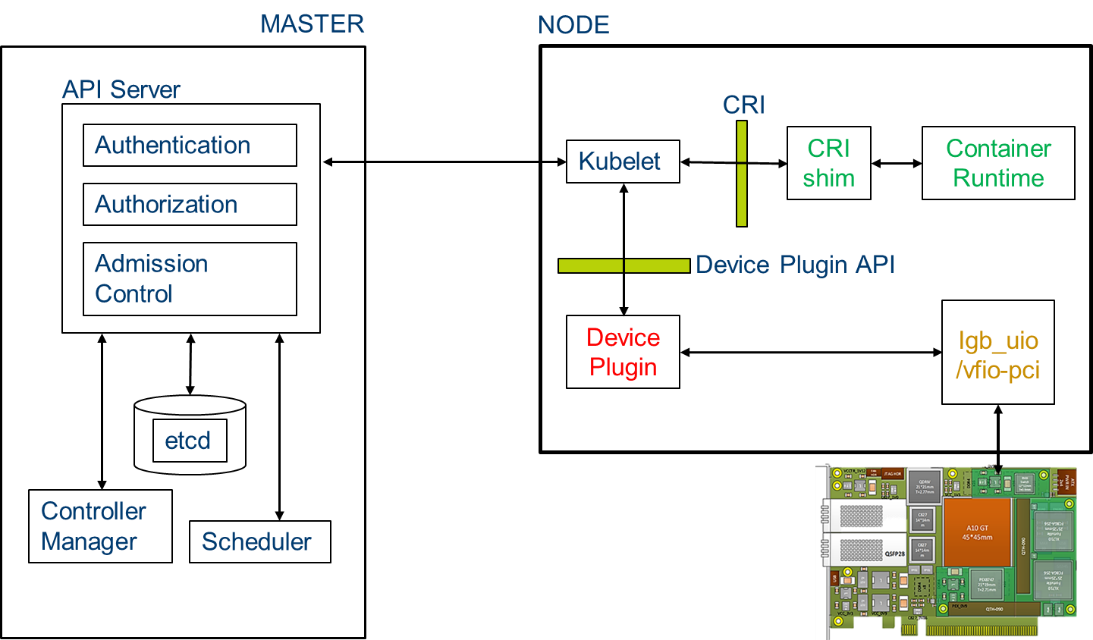 A Remote System Update (RSU) of the FPGA is enabled through the Open Programmable Acceleration Engine (OPAE). The OPAE package consists of a kernel driver and a userspace FPGA utils package that enables programming of the FPGA. Smart Edge Open automates the process of deploying the OPAE stack as a Kubernetes POD, which detects the FPGA and programs it. There is a separate FPGA Configuration POD deployed as a Kubernetes job that configures FPGA resources such as virtual functions and queues. 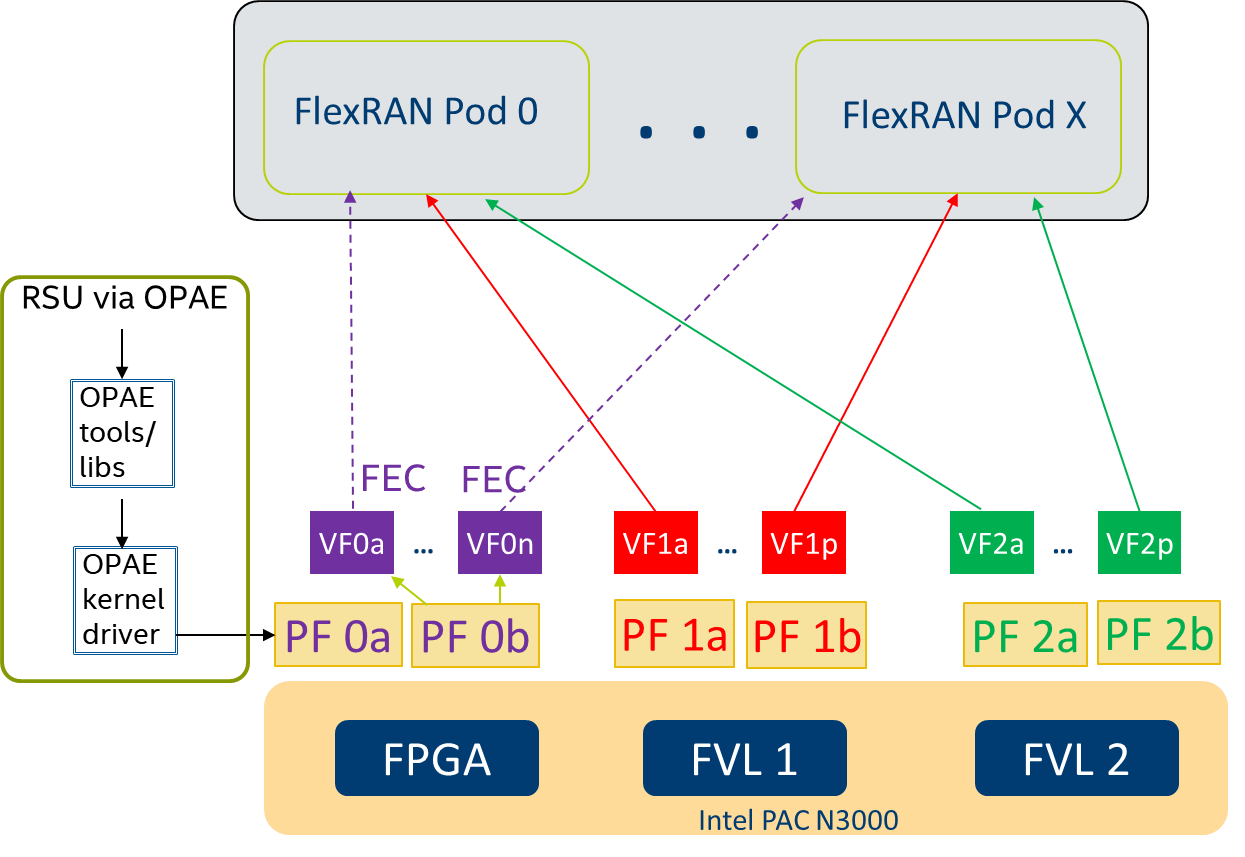 Further sections provide instructions on how to use all three FPGA features: programming, configuration, and accessing from an application on the Smart Edge Open Network Edge.

When the Intel® FPGA PAC N3000 is programmed with a vRAN 5G image, it exposes the Single Root I/O Virtualization (SRIOV) Virtual Function (VF) devices which can be used to accelerate the FEC in the vRAN workload. To take advantage of this functionality for a cloud-native deployment, the PF (Physical Function) of the device must be bound to the DPDK IGB_UIO userspace driver to create several VFs (Virtual Functions). Once the VFs are created, they must also be bound to a DPDK userspace driver to allocate them to specific K8s pods running the vRAN workload.

The full pipeline of preparing the device for workload deployment and deploying the workload can be divided into the following stages (subfeatures):

It is also assumed that the Intel® FPGA PAC N3000 MAX10 build version of the card used for Smart Edge Open setup is at least version 2.0.x and has RoT capability, ie:

For information on how to update and flash the MAX10 to supported version see Intel® FPGA PAC N3000 documentation.

To run the Smart Edge Open package with FPGA (FEC) functionality, the feature needs to be enabled on both Edge Controller and Edge Node.

To enable FPGA support from CEEK, change the variable ne_opae_fpga_enable in inventory/default/group_vars/all/10-open.yml (or flavor alternative file) to true:

Additionally, SRIOV must be enabled in Smart Edge Open:

Also, enable the following options in inventory/default/group_vars/all/10-open.yml: The following device config is the default config for the Intel® FPGA PAC N3000 with a 5GNR vRAN user image tested (this configuration is common to both the EdgeNode and EdgeController setup).

The following packages need to be placed into specific directories for the feature to work:

NOTE: for more details about deployment and defining inventory please refer to CEEK getting started page.

After a successful deployment, the following pods will be available in the cluster (CNI pods may vary depending on deployment):

It is expected the the factory image of the Intel® FPGA PAC N3000 is of version 2.0.x. To program the user image (5GN FEC vRAN) of the Intel® FPGA PAC N3000 via OPAE a kubectl plugin for K8s is provided - it is expected that the provided user image is signed or un-signed (development purposes) by the user, see the documentation for more information on how to sign/un-sign the image file. The plugin also allows for obtaining basic FPGA telemetry. This plugin will deploy K8s jobs that run to completion on the desired host and display the logs/output of the command.

The following are the operations supported by the kubectl rsu K8s plugin. They are run from the Edge Controller (the user who runs the commands needs to be a privileged user):

Sample output for correctly programmed card with get fme command

Check if the job has completed and that the state of the pod created for this job is “Completed”. Check the logs of the pod to see a complete successful configuration.

To redeploy the job on another node, use the following command:

To uninstall the job, run:

As part of the Smart Edge Open Ansible automation, a K8s SRIOV device plugin to orchestrate the FPGA VFs (bound to the userspace driver) is running. This enables the scheduling of pods requesting this device. To check the number of devices available on the Edge Node from Edge Controller, run:

A sample pod requesting the FPGA (FEC) VF may look like this:

To test the resource allocation to the pod, save the above code snippet to the sample.yaml file and create the pod.

Once the pod is in the ‘Running’ state, check that the device was allocated to the pod (a uioX device and an environmental variable with a device PCI address should be available):

To check the number of devices currently allocated to pods, run (and search for ‘Allocated Resources’):

To verify the functionality of all the sub-features are working together (SRIOV binding - K8s device plugin - BBDEV config) and functionality of the FPGA (FEC) VF inside a non-root pod, build a Docker image and run a simple validation application for the device.

The automation of the Docker image build is available from the Edge Apps package. The image must be built on the same node that it is meant to be deployed or a server with the same configuration as the node that will run the workload. This is due to the Kernel dependencies of DPDK during the application build.

From the Edge Controlplane, deploy the application pod. The pod specification is located at /opt/openness/edgeservices/edgecontroller/fpga/fpga-sample-app.yaml:

Execute into the application pod and run the sample app:

The output of the application should indicate a total of ‘1’ tests and ‘1’ test passing; this concludes the validation of the FPGA VF working correctly inside a K8s pod.